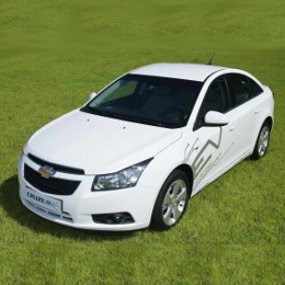 Automobile manufacturers continue to compete to improve the efficiency of electric cars. One of them adds Chevrolet electric car fleet through the Chevy Cruze EV.

Manufacturers of General Motors and its partners in Korea that GM Daewoo, LG Chemical and LG Electronics, will begin testing electric car Cruze on the streets of South Korean capital Seoul.

As quoted from the official release of General Motors, on Tuesday (9/21/2010 this demo cars at once to test the power of Korean consumers will absorb the electric car.

EV Cruze will be the full-size sedan in Korea's first electric vehicles. Cruze strengthened with EV batteries from LG Chemical which produces 150 kW and the motor power Propulsion systems from LG Electronics.

From the tests that had been held by LG Chemical, Cruze EV can go up to 160 km, the acceleration of 8.2 seconds to achieve speeds of 100 km per hour and maximum speed 165 km / h.

Cruze EV batteries can be charged for 80-10 hours in households that have electric power v. 220

GM said that some of these electric cars Cruze will use the Daewoo brand Lacettis. Its own production will commence in late October 2010.