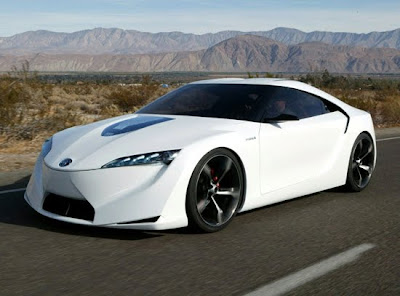 Subaru concept car development results in collaboration with Toyota, namely the FT-86 has yet to be mass produced. Now, if ready made, Subaru will stretcher to Indonesia.

Senior Manager of TC Subaru MS Perkasa, disclose that possibility, if not impossible Subaru sports car will also bring it to Indonesia.

"The possibility was brought up here (Indonesia) there must be dong, but may still be a long time," he said on the sidelines of breaking fast Subaru, in the Sunda Kitchen restaurant, Cipete Jl Raya, Jakarta, Monday (23/08/2010) night.

Moreover, continued the Mighty, the trend of Indonesian people who like a premium sports car, although it will be high priced will still be purchased as well.

Toyota concept car, own the FT-86 was first shown in competition at the 2009 Tokyo Motor Show ago and plans soon to be released version of mass production in early 2011 in Japan next.

Although developed together with Toyota, but the engine will rely on a capacity of 2.0 liter Subaru Boxer turbocharger, the power abtara estimated 160-308 hp.

FT-86 using the Subaru brand will reportedly be sold at higher prices than Toyota, which reaches 3 million yen (24 037 euros) or approximately USD 299 million in Japan.

As quoted topspeed, FT-86 version will use the platform's Subaru Legacy. Behind the sporty body is FT-86
adopt a capacity of 2.0 liter engine 6 speed manual transmission rear wheel motion, similar to the Toyota engine peg FT-86.

But where difference is FT-86 Subaru engine is more responsive to bursts of energy at 260 hp while Toyota Ft-86 is only 220 hp.

Subaru body Design FT-86 is very macho, by bringing kinetic design (like a car moving though silent). Pull-pull on the body is clearly visible from the front to the buttock.

Adopting a more wide rim adds if Subaru FT-86 is very tough for racing-kebutan invited on the streets.