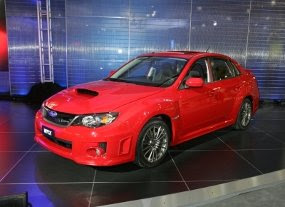 First launched in America in the carpet New York Auto Show, the latest model of the legendary World Rally Championship, Subaru Impreza WRX STI will be brought to Indonesia early next year.

It was delivered by the Senior Manager of TC Subaru, MS Perkasa on the sidelines of the event opened with Subaru in the Kitchen Sundanese restaurant, Cipete Jl Raya, Jakarta, Monday (08/23/2010) night.

"Beginning next year, the Impreza WRX STI sedan will go into the Indonesian market," said Mighty.

This 2011 model year as well as proving the existence of Subaru in the sports car segment that seemed to not want to be left out just like that, having had time to withdraw from the WRC a few years ago.

This four-door sedan has been engineered to be faster, with the front of a larger rear stabilizer bar also applications, and sub-frame that is stiffer rear bushings.

Also, of course, rear spoiler as the icon of the Impreza WRX STI is maintained with the revision to increase downforce, while reducing the overall coefficient of drag cars.