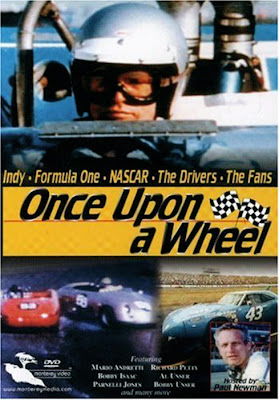 If you have Netflix you can do it instantly, or you can catch various clips on You Tube. Stick with the ones loaded by wintershollywood, they have the original audio ...

Once upon a Wheel, http://www.imdb.com/title/tt0413072/ a cool movie that Paul narrated, and got greasy wrenching on a 71 Super Bee, and takes a look at a lot of racing stars, the Unsers, Andrettis, Pettys, and so on. A lot of 1970 NASCAR footage, but also dragsters, snowmobiles and more.

Clips from early 1910 races, land speed racing on the sand and slat, Pikes Peak, Indy, and so on are amazing to watch while Paul talks you through the scenes.

http://www.netflix.com/WiMovie/Once-Upon-a-Wheel/70002931?trkid=1211018
Celebrity friends such as Kirk Douglas, Dick Smothers and James Garner join Newman at the classic Indy 500, Formula One and NASCAR events. Featured are some of the most legendary race-car drivers of all time, including Mario Andretti, Parnelli Jones, Bobby Isaac, Richard Petty, Al and Bobby Unser and many more.

Some reeally famous people not named in the review, but getting moments on screen are John Wayne, Kirk Douglas, Wilt Chamberlain, astronaut Pete Conrad, Glen Ford, and others as the cameras were takne through the pits at the first Ontario Motor Speedway celebrity pro- amateur charity race, which was won by Dick Smothers and Bobby Unser. Motion Picture and televison relief fund was the charity.